Systems Science and Complexity Science - related but not the same

I'm studying again and for that, I'm reading. A lot. I'm reading about systems thinking and factors that support sustained outcomes of development interventions. Often I stumble on things that make me go: "Ooh - I should remember this next time I do ABC" So this blog is being revived a bit to help keep track of these random thoughts.

I read about the history of systems thinking and complexity science and how both fields have similar challenges. Two great resources:


Midgley and Richardson comparison of paradigms in the Systems Field and the Complexity Field. 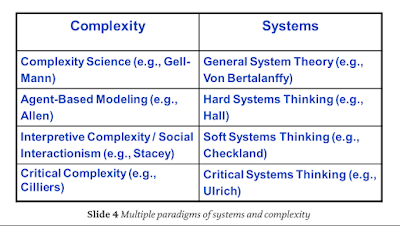 Systems scientists were embroiled in a paradigm war, which threatened to fragment the systems research community. This is relevant... because the same paradigms are evident in the complexity science community, and therefore it potentially faces the same risk of fragmentation.

My interest in reading about the relationship between systems science and complexity science got sparked when I looked for examples of emergence, feedback and self-organization in my data and couldn't figure out what that would look like. A colleague suggested that while the concept "feedback" definitely occurs in multiple branches of the systems field (oh and there are so very very many), that the concepts "emergence" and "self-organization" are from complexity science.

One may argue that it probably doesn't matter into which categories these concepts fall, but actually, it does. Because the ontological and epistemological assumptions that underly these paradigms may or may not be similar and should be questioned.